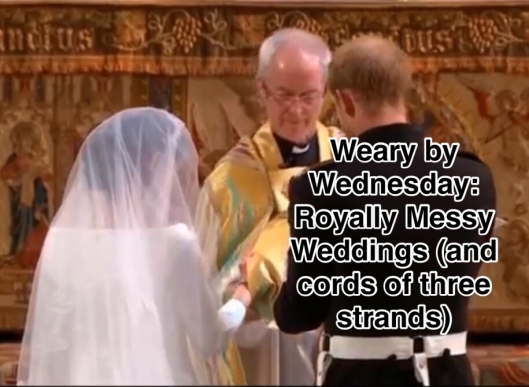 I’m guilty. I woke up early on Saturday and turned on the wedding. I don’t even need to tell you more details, you know…The Wedding.

Royals aren’t really my thing, and I don’t recall watching any of the previous weddings, except Charles and Diana, for 5 minutes while I got ready for work back in the day.

This week, however, the news caught my attention a few days before, and just like my life, this could prove to be a totally messy wedding.

Back when I watched Charles and Di, I was still single. I still had that fairly tale ending view on weddings, marriage and happily ever-afters.

Now, I have a history.

The rows have been difficult to hoe and there were rocks and boulders in the way. I hadn’t planned on them, and neither did Charles and Di, but life happens. And I didn’t always handle things well.

Families are complicated and messy, even if they aren’t tainted with divorces and blendings. And no matter how outlandish and absurd things get, there is always room for just one more unexpected lunacy when weddings roll around.

Fortunately for most of us, the paparazzi aren’t lurking in the shadows trying to make a buck off of our calamities – making Saturday’s wedding Weary by the Wednesday before, for all the world to see.

But Harry and Megan survived the week’s drama, with grace, in my opinion. And prayerfully they will not fall into the “sins of their fathers.”

Hopefully they will rise above the difficulties that every marriage faces, and those that most of us can’t really imagine.

I pray they learn early to cling to each other and to God. Because the two things I have learned is marriages thrive when God is included and He is able to make something out of even the messiest of messes. Solomon said it best in Ecclesiastes:

Though one may be overpowered, two can defend themselves. A cord of three strands is not quickly broken. (Ecclesiastes 4:12)

After they exchanged rings, the priest wrapped Harry and Megan’s hands in his stole. Handfasting, as it is known, is used in the church to symbolize this cord of three strands. A bond between the couple and God. When his stole is completely wrapped around their their hands, the priest proclaims “Those whom God has joined together, let not man put asunder”.

Harry and Megan, congratulations on a beautiful wedding. Godspeed to you, but don’t speed ahead of God. Wrap that cord tight, you will need it!

If you watched the Royal Wedding, what was your favorite part?

Thanks for sharing your Wednesday with me. I’m praying for those of us caught up in the messiness of life.

2 thoughts on “Weary by Wednesday: Royally Messy Weddings (and cords of three strands)”

Find a Blog by Category

is a survivor of domestic violence. This is not a blog about revenge, anger or animosity. This is a call for those caught up in abuse to find the power to get out. This is a call for others to open their eyes and see what is around them. A call to be your sisters keeper and become aware of the signs of abuse and to be the love and inspiration a victim needs to move forward and become a survivor.

This is also a place for single parents to find hope, healing, and encouragement in their journey.

A South Floridian for as long as she can remember, Jennifer studied elementary and learning disability education at Palm Beach Atlantic University and enjoyed a career as a mom, public school substitute teacher and educational specialist for Florida Power & Light.

Jennifer now writes and enjoys traveling with her husband, Russ, one large dog and one fat cat, by sea on their sailboat, or on land in their camper.

Together, they have four grown children and eight grandchildren. Home is any place they stop for the night.